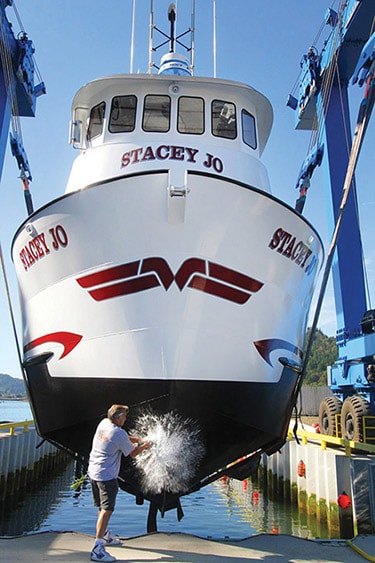 It's a sunny October day in Reedsport, Oregon, and Jim Rando watches as his new crab fishing vessel, Stacey Jo, cradled on a boat lift, edges its way to the water and comes to a stop. Rando lifts his bottle of champagne and strikes the vessel's gleaming steel hull — marking a ceremonial conclusion to a long-awaited dream.

"I've been fishing for crab and salmon for 30 years in older crab fishing boats," says Rando, who fishes off the California coast. "I always wanted to have a bigger crab boat to haul in bigger harvests of Dungeness crab and make crab fishing easier. I wanted to build a boat the way I wanted it built."

Down to every detail

Rando knew he wanted a wider vessel, but above all, his new crab boat had to have a top house. "I wanted a top house above the main cabin so I could see better when I'm crab fishing." Scott Kent, a civil engineer and naval architect at Fred Wahl Marine Construction, worked with Rando to get every detail right.

"I told Scott how I wanted the top house built, and he came up with drawings for that and the whole boat," Rando says. "I live in the Santa Cruz area, so I flew up to Oregon twice a month to go over new ideas I had for the interior design, refrigeration system, and whatever came up during the construction process. We changed our minds a lot, but it turned out to be a beautiful boat."

"When I discussed marine engines with Mike Wahl, Fred's son, he mentioned that their company uses many John Deere engines in the new boats they build," explains Rando. "I told him that's good because that's the engine I want in my new boat. A bunch of my fishing buddies use John Deere engines, and they really like them. Plus, I already have experience with a John Deere engine in my older fishing boat."

Rando has fished with his new boat for about two years in Half Moon Bay and Crescent City. "I like everything about the new John Deere marine engine," he says, "The engine has been really quiet and very dependable."

The importance of engine torque

Engine torque is also important to Rando because of all the weight his boats carry. He typically takes 280 pots out with him while he’s crabbing — each weighing 50 kilograms (110 pounds). The boat has a maximum displacement of 84 long tons (85.3 metric tons).

"When you add the weight of the water in the crab and freshwater tanks as well as the fuel tanks, you're pushing a lot of weight," Rando says. "It takes a lot of engine torque to push this heavy of a load, and the John Deere engine is designed well for that application."

As Rando sits quietly in the spacious top house of the Stacey Jo, he reflects on the significance of having a custom boat. "I really do like being on the ocean, and I love to fish. The Stacey Jo is the first boat I ever had custom built. If I ever decide to build another boat, I will for sure put John Deere engines in it."

It takes a lot of torque to push this heavy of a load, and the John Deere engine is designed well for that application.